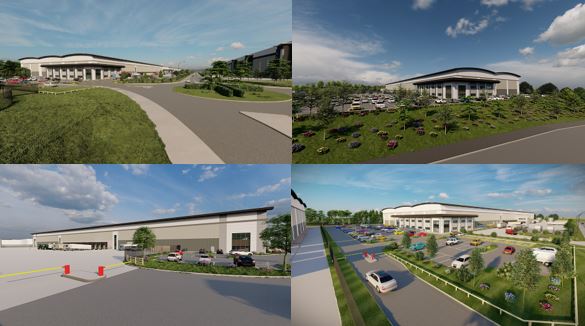 Acting on behalf of Clowes Developments (UK) Limited, FHP have confirmed that they have negotiated the sale of six logistics facilities within the East Midlands region in a landmark deal worth circa £100 million with UK insurance giant NFU Mutual.

The deal will deliver six new Grade A logistics facilities, five of which will be speculatively built with the sixth being a new pre let facility.

The six buildings total in excess of one million square feet and are located across three of Clowes Developments’ distribution sites at EMDC, J24, M1, Castlewood, J28, M1 and Centrix Park in Corby.

Included in the package is a new 162,500ft² facility being developed at Centrix Park for Deichmann Shoes and construction has started onsite with Deichmann due to take occupation of their new facility in January 2022.

Clowes have submitted detailed Planning Applications for the remaining five units and are aiming to be onsite in July to enable all five facilities to be completed in the Summer of 2022.

The development of the two units at Corby sees Clowes having fully developed their 39 acre site which has also attracted BakeAway, MKM Building Supplies and several national trade counter retailers.

These sites are the last two remaining large plots on Castlewood Business Park at Junction 28 which has been the most successful distribution site in the area, attracting high profile occupiers including Co-op Food, Alloga and the specialist furniture manufacturer, Parker Knoll.

EMDC is accessed from the A50(T) and J24 of the M1 and has attracted the one million square foot e-commerce M & S distribution centre in addition to the UK HQs of both Moran Logistics and one of the largest e-commerce furniture providers, Birlea Furniture.  These two deals mean that there are two sites remaining at EMDC.

“This deal is of huge significance to the group, for NFU to entrust a significant amount of capital in Clowes Developments is recognition on how far the group has come.  This deal is by far the biggest transaction that we have concluded as a group to date but we have other deals in the pipeline and this is an exciting time for the company.

It is said repeatedly but with little emphasis of its significance that the success of a deal is down to teamwork.  I can wholeheartedly say that our in house teams at Clowes HQ, dedicated legal representatives Heather Dixon and Chris Hawrylak, our Architect Ben Hall at IMA Architects and our Agent, John Proctor at FHP Property Consultants, have all played a vital role in getting this deal over the line”.

Paul Shanley, who handles the site at EMDC, added:-

“The deal with NFU Mutual is a departure from our group’s normal internal funding arrangements, primarily due to the size of the proposal.  The financial strength of our group and reputation for delivery was a major factor in us being approached by NFU Mutual.  It soon became apparent that we share similar values and ideas, resulting in agreement to move forward together.  We set our joint teams a tight timescale to get the deal over the line and thanks to a total commitment from all of the team involved we have made it happen in record time”.

The Planning Applications have been prepared and are submitted to enable us to be onsite this Summer delivering good quality big shed stock into the market for the Summer of 2022”.

“NFU Mutual are delighted to be working with Clowes Developments to bring through the development of these six prime industrial buildings in three prominent locations around the M1.  This project forms a key part of NFU Mutual’s strategy and we are excited to be partnering with Clowes Developments to deliver best in class space into the market.  I too would also like to thank our team which included our Solicitors, Gowlings WLG, Project Managers PSK and our Property Advisors, Burbage Realty”.

FHP and Burbage Realty have been appointed as Joint Agents acting on behalf of NFUM as Joint Letting Agents and more information is available on the buildings by contacting John Proctor or Tim Gilbertson at FHP and Tom Kimbell and Cameron Mitchell at Burbage Realty.